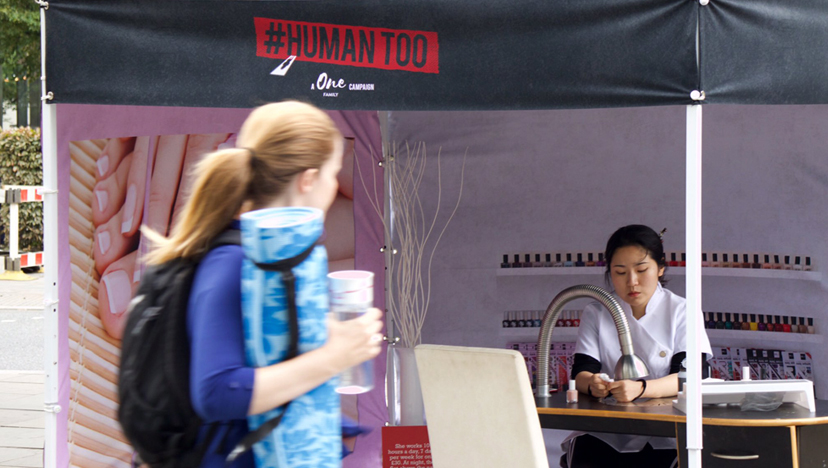 UK’s first Anti-Slavery Commissioner Kevin Hyland OBE, put his support behind a One Family public awareness campaign to stand in solidarity with victims and survivors of human trafficking, recognising their humanity and asking everyone, everywhere, to be a part of putting an end to trafficking and modern slavery.

“It’s fantastic that One Family is raising awareness of modern slavery and human trafficking in the heart of the City of London. It is a reminder that this crime impacts society in many different ways,” said Hyland.

As a part of the campaign, a collaboration with Idea East, actors in installations across the City of London representing a nail bar, a school, a hotel room, a prison, and a construction site, will spotlight key industries that people are trafficked into in the UK. Our installations highlight that human trafficking is hidden in plain sight: a dark underworld oozing just beneath the surface of our everyday lives.

Hyland added, “It is a reminder that this crime impacts society in many different ways. Most of those who perpetrate these crimes do so for financial gain. No matter what business sector or industry the criminals take advantage of to exploit vulnerable people, it is only through collaboration between the community, the private sector, NGOs, statutory agencies, faith groups and government that we will finally eradicate this crime.”

Thousands of victims are trafficked into slavery in the UK and kept hidden in plain sight, often working seven days a week for little or no pay in nail salons, car washes, building sites, kitchens, factories, and farms. They are trapped, abused and exploited, with no hope of returning home to their loved ones. Often, unknowingly, we are contributing towards someone else’s suffering by buying services and products from people living in modern slavery.

We can’t leave it to law enforcement to fight human trafficking alone. All of us must stand watch against modern slavery, rooting it out of our communities, leaving no refuge for traffickers. We are asking people to learn the common signs of trafficking and slavery, and to be vigilant; to report suspicious activity to the police; to be curious about the businesses they buy from and use their purchasing power to support those that are upholding human rights.