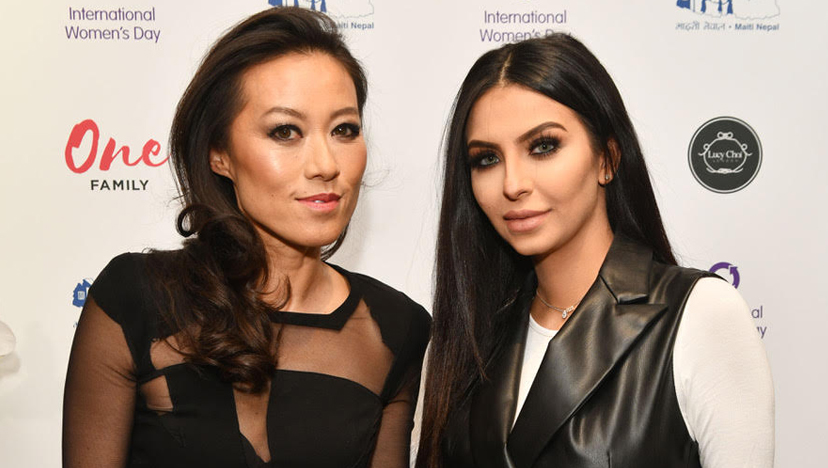 Ahead of International Women’s Day 2020 on Sunday 8th March, influencer Faryal Makhdoom and designer Lucy Choi have announced they are to lead a gruelling trek across the Himalayas to step up the fight against human trafficking.

At a special reception to mark International Women’s Day in London – hosted by One Family – the prominent figures from the world of fashion and beauty are hoping the trek will raise awareness of the trafficking of women and girls across the Nepal-India border.

Blogger and influencer Faryal and shoe designer Lucy will lead a team of fellow influencers through the snow-capped peaks from Pokhara to Poonhill, before meeting trafficking survivors in Kathmandu. This visit will take place at the rehabilitation home of One Family’s Anti-Trafficking Fund partner Maiti Nepal, which has rescued over 40,000 victims to date.

The high-profile reception was held at the original atelier of shoe guru Jimmy Choo. Inspired by her uncle’s commitment to craftsmanship while creating his handmade couture shoes, Lucy launched her own footwear brand in 2012. Speaking of the challenge ahead, Lucy – CEO and founder of Lucy Choi London – says: “I have been a proud supporter of One Family for some time now and I hope this trek will raise lots of money as well as increase awareness of a very destructive crime. Human trafficking is a huge blight on our world, and has such a damaging physical, mental and emotional impact on individuals. We know that victims suffer with all kinds of serious health issues, including HIV/AIDS and malnutrition, as well as depression and overwhelming shame. Anything we can do to prevent trafficking and support those suffering is incredibly important.”

Renowned blogger Faryal – who is married to boxer Amir Khan and founder of her own makeup brand, Faryal London – adds: “Traffickers see the human body as means of making money, and the number of victims is likely to be far larger than we imagine. As a mother to two daughters, I feel duty-bound to take on this challenge with Lucy and join One Family’s fight against the exploitation on Nepali women and girls.”

An estimated 12,000 people are trafficked from Nepal every year, and the journey from its border into India is one of the easiest and busiest slave-trafficking routes in the world today, with only 14 checkpoints over a distance of 1,850km.

Forced labour, sexual servitude, prostitution and human tissue extraction are among the many forms of exploitation which result in girls and women going missing every single day. They are trafficked into a growing sex industry in Kathmandu Valley, as well as other countries such as India, China, Malaysia, the UAE, and further afield.

One Family is working with partner organisation Maiti Nepal to continue and scale-up the fight against trafficking, which is the second largest criminal trade in the world today.