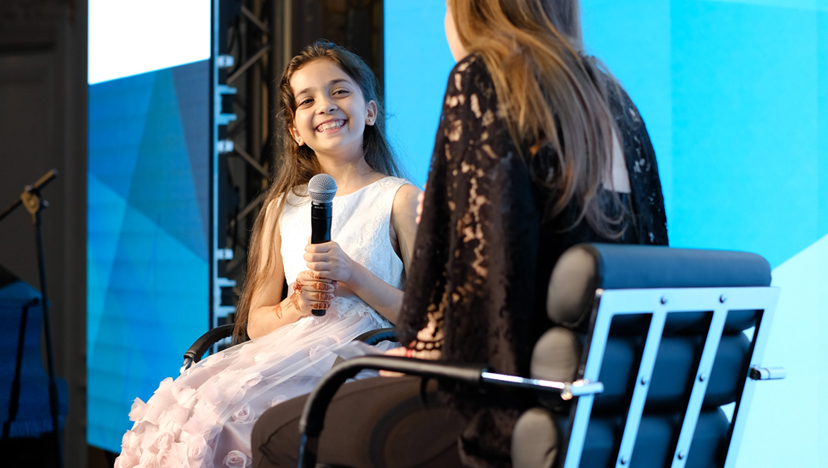 Bana Alabed was announced as an Ambassador of One Family’s Refugee Fund, as she took to the stage for Iftar at The Savoy.

8-year-old Bana is a Syrian peace campaigner from rebel-held Aleppo, now living in Turkey. When Bana was just seven years old, she took to Twitter, with the help of her mother, to describe the horrors she and her family were experiencing in war-torn Syria and make a simple plea for peace.
Her heartrending messages touched the world and gave a voice to millions of innocent children. Her twitter account now has over 350,000 followers, including J.K Rowling, and is managed with the help of her mother Fatemah.

Bana’s happy childhood was abruptly upended by civil war when she was only three years old. Over the next four years, she knew nothing but bombing, destruction, and fear. Her harrowing ordeal culminated in a brutal siege where she, her parents, and two younger brothers were trapped in Aleppo, with little access to food, water, medicine, or other necessities.

Facing death as bombs relentlessly fell around them—one of which completely destroyed their home— Bana and her family embarked on a perilous escape to Turkey where they now have citizenship. Bana lost her best friend, her school, her home, and her homeland. But she has not lost her hope—for herself and for other children around the world who are victims and refugees of war and deserve better lives.

As Bana shared her experiences and appealed to the audience on behalf of the Syrian people, she stole the show. Attendees for the evening included actress Laila Rouass, music producer Naughty Boy, and boxer Amir Khan. Maher Zain performed live, and guests heard the amazing voice of new Awakening Records artist Eman for the first time ever.

Bana is now happy to be settling into a new school in Turkey and has since gone on to have her own book published, entitled Dear World: A Syrian Girl’s Story of War and Plea for Peace which was released in October last year. This book offers a uniquely intimate, child’s perspective on one of the biggest humanitarian crises in history. At the start of this year, Bana also made an appearance at the Oscars, joining other activists on stage during a performance of Stand Up for Something by rapper Common and singer Andra Day.